Indulge in nature's unusual bounty with this naturally sweetened  Honey Loquat Butter, which is just begging to be spread on some fresh crusty bread or used as a sweetener in baked goods in place of apple sauce.

If you are lucky enough to have a loquat tree in your yard, or a neighbor with a loquat tree then you are going to just love this recipe.

Especially if your tree ripens all at once and you need to use up a LOT of fruit in a very short period of time....which let's face it, it does every time!

Where To Get Loquats

Loquats tend to be the type of fruit you have to get from a tree in your own yard, or from a friend's tree.

The fruit itself does not last very long once it has been picked, which is why it has not been sold in stores or farmer's markets over the years.

I have noticed them popping up at farmer's markets now and again though in recent years, so if you do happen to come across some be sure to snatch them up, they won't last long and they taste just delicious.

TIP: use within a day or two of being picked as they very quickly go from perfect to overripe.

There is something oddly rewarding with preserving fruits and vegetables when you are faced with an unusual amount that needs to be used up quickly.

Using up loquats is certainly no exception.

I make massive batches of this loquat butter.

TIP: freeze in individual serving sizes, or in mini mason jars so that a small amount can be thawed at a time.

I used honey as a sweetener for my loquat butter as I find it pairs well with the flavor of the loquat.

I find the loquats sweet on their own, so don't find the need for much sweetener, but add more if you prefer.

You can always sub in another liquid sweetener of choice like maple syrup or agave syrup.

How To Use Loquat Butter

This stuff is pretty versatile.

Use wherever you would use a jam or a preserve.

You can also use:

Do you have any loquat recipes you love to use when spring hits and the loquats are plentiful?

Feel free to share them in the comments, I am sure everyone would love to hear all about them. 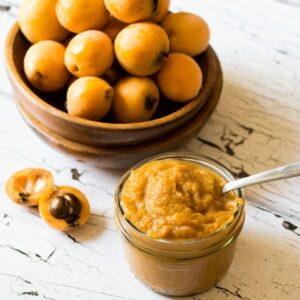 I am so glad you are here!

Since I have a part-time job, 3 little kids, and a love of good food (as do you I assume), I have learned how to get the most out of the kitchen in the smallest amount of time.

Forget about hunting down weird ingredients and making trips to specialty shops.

We are going to make the most of what is available at the store and farmer's markets all whilst enjoying some delicious meals the whole family (hopefully...if you have fussy eaters I guarantee nothing) will enjoy.

Pop on that apron and let's get creative in the kitchen!