A smoothie version of the traditional cinnamon roll using better-for-you ingredients, the Banana Cinnamon Roll Smoothie is a decadent and super creamy smoothie you can enjoy as a treat without any of the guilt. It even has added oats, which means you can have dessert for breakfast!

We had a pie shop open up down the road and they offer pie milkshakes.

They put an entire slice of your favorite pie into a blender and make it into your very own personal milkshake....

I ordered one, drank half and felt sick for the rest of the day.

How To Make A Better-For-You Banana Cinnamon Roll Smoothie

Now I know the idea of putting an entire cinnamon roll into a blender and making it into a smoothie does sound kind of amazing, I am not here to do that for you today.

An experiment for your own time perhaps?

Instead I have made a much healthier version you can enjoy without having to worry about feeling sick for the rest of the day.

And it is just as easy to make. Simply add all of your ingredients to a high-speed blender, blend until everything is smooth and creamy, and you are good to go.

Save the real pie-shake for the weekend.

A Note On Ingredients

The ingredients for this recipe are pretty simple:

Yes you need to add the ice cubes. The only other frozen ingredients used is the frozen banana, so without the ice cubes the smoothie will not be cold enough.

If you do not have any frozen bananas, you can always sub in a fresh banana and simply add more ice cubes. Remember, the more ripe your banana is, the sweeter it will be, so if you are using a super ripe banana you might want to cut back on the number of dates you use.

Mejdool dates are best. These are the bigger, stickier dates (like these ones) and they will give your smoothie that great texture and caramel taste you want.

You will find them in little containers or big boxes in the fruit and veggie section of most supermarkets.

If you can’t find them you can always sub in some neglet or noor dates, although it will be a little more work.

Simply soak them in warm water for 5 mins, drain them and then use them as called for in the recipe.

Old fashioned oats are what makes the smoothie extra creamy and filling.

If you prefer to avoid oats you can sub in some quinoa flakes or leave out altogether.

If you follow a gluten-free diet be sure to check the notes on the packaging in relation to whether your oats are suitable or not.

It is ok to use chia seeds if you are going to serve this and drink it straight away.

If you plan to keep it or sip on it over a period of time it may become gelatinous, which I don't mind but some people (my husband) won't drink.

Incorporating a smoothie into your morning routine is a great way to make sure you are starting off the day on the right foot.

Try these smoothies out: 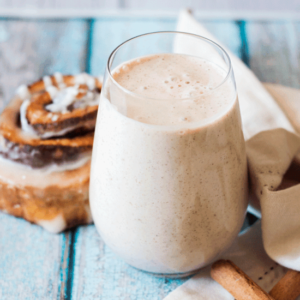 A healthier version of the traditional cinnamon roll, the Banana Cinnamon Roll Smoothie is a decadent and super creamy smoothie you can enjoy every day without any of the guilt. It even has oats in there, which means you can have dessert for breakfast!
4.62 from 21 votes
Print Recipe Pin Recipe
Prep Time 5 mins
Total Time 5 mins
Course Drink
Cuisine Drink
Servings 2 serves
Calories 221 kcal

It is ok to use chia seeds if you are going to serve this and drink it straight away. If you plan to keep it or sip on it over a period of time it may become gelatinous, which I don't mind but some people (my husband) won't drink.

Hi, I'm Donna! Mum of three and wife to one.

I would love it if you joined me on a journey of creating happy people and happier bellies by cutting down on the processed foods in our diets, and indulging instead in delicious whole foods.