I have close to a million granola recipes on rotation. I wasn't planning on adding anymore...but then I had this idea. Clearly I had to add another one to my repertoire.

It came to me in a moment of desperateness caused by sleep deprivation. My youngest, in case you didn't know, (coz I don't talk about it every week or anything) doesn't sleep. He is ridiculous. Sooo...my morning coffee, followed by an awesome smoothie just doesn't provide the kick I need. I have found myself wanting chocolate (all the freakin' time)....but who can justify chocolate at 7.30 in the morning? Ah me, now that I have this sophisticated granola in my life 🙂 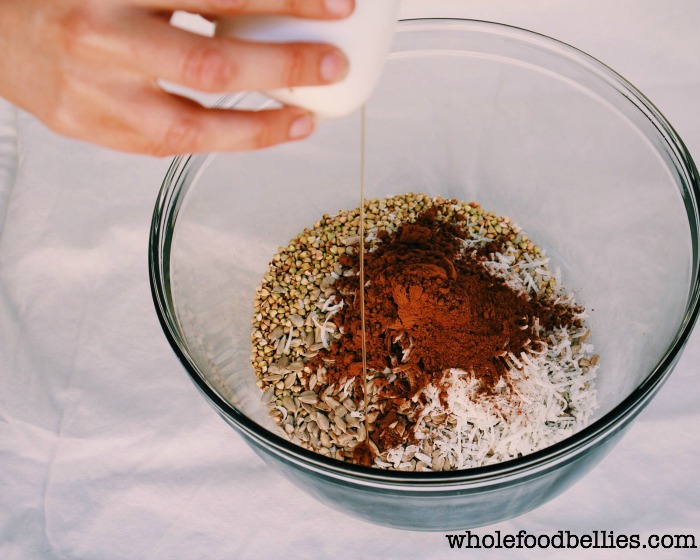 This granola is amazing! Raspberries and dark chocolate are pretty much the ultimate combination in my mind - throw them in your breakfast cereal and you are starting the day right! Seriously. 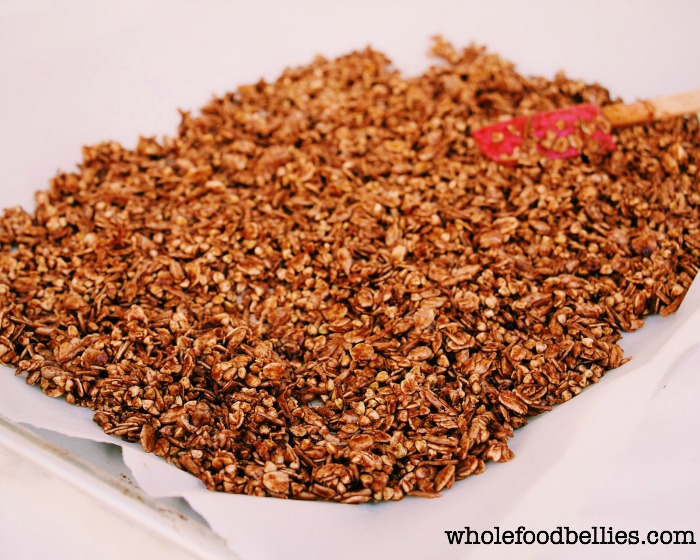 I tried out some raw buckwheat groats for the first time with this batch, just to change things up a bit: let's just say they will be featuring in a lot of my granolas from now on - so crunchy!

I hope you enjoy this beautiful granola as much as I do. Oh and my 2 year old....she was ecstatic to learn that there were chunks of chocolate hidden in her breakfast 'nola'. That's bad parenting for you right there (I call it survival....and it's still better than the boxed stuff so what the hey). I will deal with her growing dark chocolate addiction when I come out of my sleep deprived state.

I made this a nut free version because we eat so many nuts throughout the week, but if you want to make it a bit more decadent, throw some hazelnuts in with step 2 (in the recipe below) - it takes it to a whole other level. 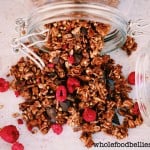 If you want to make it even more decadent throw in some hazelnuts in step two! Time Saving Tip: Make a double batch. Keep one in the fridge and one in the freezer. When you are ready for the frozen batch, just remove from the freezer the night before you need it, pop into a glass jar and store in the fridge.

Hi, I'm Donna. Mom of three and wife to one. I would love it if you joined me on a journey of creating happy people and happier bellies by cutting down on the processed foods in our diets, and indulging instead in delicious whole foods.
I focus on fast, simple and seasonal dishes the whole family will love - kid approved of course! Healthy and wholesome doesn't have to be boring!

Get Exclusive Recipes To Your Inbox Now! 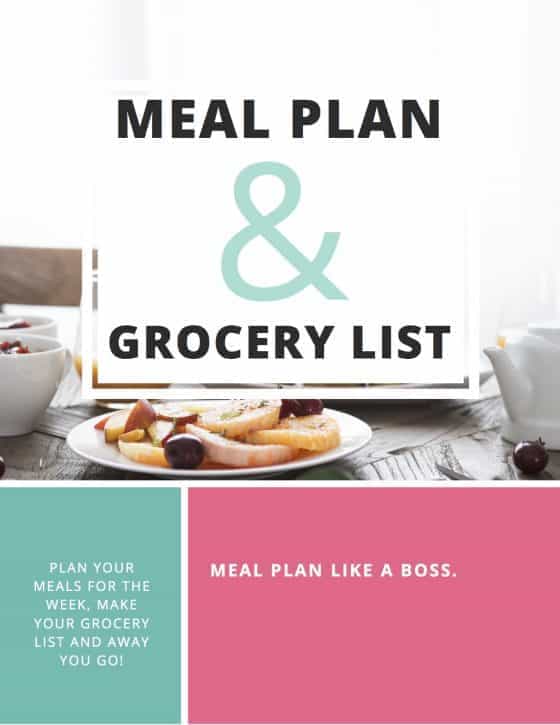 © Whole Food Bellies 2020. Unauthorized use and/or duplication of text and/or photographs from this blog without express and written permission of the author and owner of this blog are strictly prohibited. Links are allowed when clear credit is given to wholefoodbellies.com with appropriate and specific direction to the content.