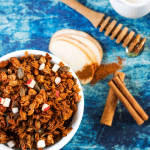 Fresh Apple Cinnamon Granola smells amazing whilst baking along in the oven, and tastes even better! What more screams Fall in a bowl that a combination of freshly baked apples, dried cranberries, lots of cinnamon, maple syrup, and some pumpkin seeds? The perfect combination! Pairs well with some milk or yogurt, on top of some muffins just before baking, or as a snack all by itself.

Is there anything better than homemade granola?

Apple cinnamon granola is a super fun homemade granola recipe that is super easy to make and uses only simple, wholesome ingredients.

Homemade Granola Is So Easy To Make

Simply add all of the dry ingredients to a bowl and combine to make sure everything is mixed properly.

Melt the coconut oil over a low heat and then whisk in the honey and vanilla.

Pour the wet mixture onto the dry and give everything a really good stir to make sure that it is combined, and all of the dry mixture is coated with the wet.

You will need to put in some elbow grease here as it can be hard to mix.

You will also need to be sure to have a bowl big enough to mix everything in, you don't want your homemade granola spilling over the edges of the bowl as you mix!

Add Some Baking Paper So Your Cinnamon Granola Doesn't Stick

Once everything has been properly mixed, add the apple cinnamon granola mixture to a baking tray prepared with a layer of baking paper/parchment paper and spread it out with a spatula.

You want a nice even layer so everything cooks at the same time.

Pop the granola tray into the oven for about 40 minutes, or until the granola is nice and toasted and golden.

When you remove homemade granola from the oven it can seem a bit soft and soggy, simply allow it to cook completely and it will get nice and crispy for you.

Allow to cool completely before storing in a glass container with a lid.

Why Is The Cooking Temperature So Low?

We are using a low cooking temperature here to dry out the apple pieces slowly.

If the oven temperature is too high the apple pieces are more likely to burn than dry out, and your granola won't taste as good.

This is also important if you are using honey as the sweetener (as opposed to maple syrup), as you do not want that to become too hot and burn.

How To Store Homemade Cinnamon Granola

Allow to completely cool before storing granola, otherwise it will not crisp up enough, and may end up soggy from the condensation gathering in the storage container.

Store in an airtight container with a lid.

Your apple cinnamon granola can be stored on the benchtop for a couple of days without a problem. However, when using fresh fruit like in this recipe, I prefer to keep my homemade granola stored in the fridge.

It will last a lot longer this way.

Homemade granola freezes really well, and for that reason, I usually make a double batch. One for now and one for the freezer.

But of course you do, like I said, there is nothing better than homemade granola!

Luckily for you, we love our granola, and have lots of recipe to share:

Fresh Apple Cinnamon Granola smells amazing whilst baking along in the oven, and tastes even better! What more screams Fall in a bowl that a combination of freshly baked apples, dried cranberries, lots of cinnamon, maple syrup, and some pumpkin seeds? The perfect combination! Pairs well with some milk or yogurt, on top of some muffins just before baking, or as a snack all by itself.
5 from 8 votes
Print Recipe Pin Recipe
Prep Time 10 mins
Cook Time 40 mins
Total Time 50 mins
Course Breakfast
Cuisine Breakfast
Servings 12 serves
Calories 265 kcal

This is very cinnamony, so if you aren’t a huge fan of cinnamon you might want to reduce the amount you use. To freeze, arrange them in a single layer on a baking sheet small enough to fit into the freezer. Pop into the freezer. Remove when frozen and transfer to a freezer-friendly container or Ziploc bag and pop back into the freezer until ready to use.

I am so glad you are here!

Since I have a part-time job, 3 little kids, and a love of good food (as do you I assume), I have learned how to get the most out of the kitchen in the smallest amount of time.

Forget about hunting down weird ingredients and making trips to specialty shops.

We are going to make the most of what is available at the store and farmer's markets all whilst enjoying some delicious meals the whole family (hopefully...if you have fussy eaters I guarantee nothing) will enjoy.

Pop on that apron and let's get creative in the kitchen!