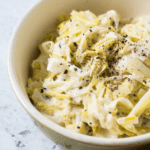 Move over creamed spinach, this Creamed Leeks with Crème Fraîche side dish is going to blow your mind. Fantastically flavorsome and elegant without requiring too much work on your behalf. Simply slice the leeks into thin noodle lengths with a sharp knife, boil and then sauté to perfection, and mix with a simple crème fraîche and black pepper sauce. Creamed leeks make a great side dish when you are looking for something a little bit different that isn't going to require too much time in the kitchen.

Disclaimer: This post includes affiliate links, and I will earn a commission if you purchase through these links. Please note that I’ve linked to these products purely because I recommend them and they are from companies I trust and use myself.

When leeks are in season and not ridiculously overpriced, this creamed leek side dish is a great way to get creative in the kitchen and whip up something a little bit different.

No need for a vegetable spiralizer, these slippery leek noodles are hand-cut using a sharp knife, making them a super easy side dish to whip up in no time at all.

Nothing too left of field.

How To Make Creamed Leek

Creamed leeks are so easy to make.

The leek slices should be even in size and width to ensure they all cook at the same time and end up having the same texture once cooked.

Tip: Wash Those Leeks Well! They tend to hold on to a lot of dirt so be sure to give them a good scrub.

Once you have sliced the leek into thin strips make sure you wash it really well, as leeks tend to hold on to a lot of dirt.

I tend to wash it before cutting and then wash the leek noodles again after they have been cut.

It is important to sauté the noodles after they have been drained of the cooking water for two reasons:

Not appetizing at all.

Use a pair of tongs to move the leeks around the hot pan until there is no water pooling between the strips.

Watch it though, we don't want them to burn.

A Note On Ingredients

Leeks are something most of you have probably worked with in the past, most likely for a simple potato leek and cheddar soup.

However, combining them with crème fraîche and lots of freshly ground pepper changes this humble vegetable from a ho-hum everyday ingredient, to something a little bit more exciting.

This can be found in the cold section of the supermarket where you would find sour cream and other creams.

If you cannot find it, or it's not something you want to hunt down, you can easily substitute it with sour cream or full-fat Greek yogurt.

Please note, these are not as rich or tangy as crème fraîche, so there will definitely be a difference in the end result.

However, in a pinch, they will work.

You can definitely use a good quality extra virgin olive oil for creamed leeks.

However, if you want to kick it up a notch, try adding something a little more decadent, like roasted hazelnut oil or macadamia oil.

These can be found in well-stocked supermarkets in the same section as olive oil.

Veggie Noodles With A Twist

The combination of the already creamy leeks with some crème fraîche here makes for a beautifully rich dish.

It works perfectly as a side dish when served with:

I have also been known to eat them all by themselves.

Vegetables can be super versatile and easily used in lots of different ways to change up meal time.

Check out these recipes: 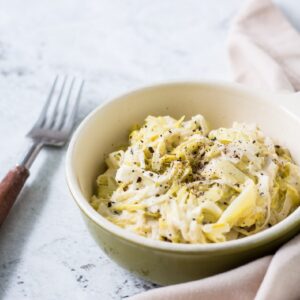 Whole Food Bellies
Move over creamed spinach, this Creamed Leeks with Crème Fraîche side dish is going to blow your mind. Fantastically flavorsome and elegant without requiring too much work on your behalf. Simply slice the leeks into thin noodle lengths with a sharp knife, boil and then sauté to perfection, and mix with a simple crème fraîche and black pepper sauce. Creamed leeks make a great side dish when you are looking for something a little bit different that isn't going to require too much time in the kitchen.
0 from 0 votes
Print Recipe Pin Recipe
Prep Time 10 mins
Cook Time 12 mins
Total Time 22 mins
Course Side Dish
Cuisine Anytime
Servings 4 serves
Calories 75 kcal

After rinsing well, put the greens of the leeks into a Ziploc bag in the freezer and save them to make homemade broth. Oil EVOO can be replaced with toasted hazelnut or macadamia oil to jazz up the dish a bit.

This recipe has been updated from the original version published on 2nd March 2015 to include new photos, tips, recipe substitutions, and serving recommendations.

Hi, I'm Donna! Mum of three and wife to one.

I would love it if you joined me on a journey of creating happy people and happier bellies by cutting down on the processed foods in our diets, and indulging instead in delicious whole foods.